I was born and raised in Salt Lake City, Utah and have loved growing up here. The fondest memory I have growing up here is experiencing the 2002 Winter Olympics when they were in town. I remember going to watch several different sporting events in various places around the Salt Lake valley with my family and watching world class athletes compete. Part of my wonderful experience came about due to the security that was placed throughout the different events. The Salt Lake Olympic Games happened after the events of 9/11 and security was a big concern for travelers and citizens as they were enjoying the games. Introducing modern security tactics in vulnerable areas of travel is important to keep residents and tourists safe during any international event. Now Russia has the opportunity to host their first Winter Olympics in February of 2014, and want the games to run efficiently and safely. Russia hosting the Olympics comes at a concerning time because there are some upset citizens in the surrounding region of Sochi (home of the 2014 olympics). Violence has been the method of protest for these upset citizens, and their violence is directed towards targeting civilians, whether they are Russian or foreign. Political instability can threaten an international spectacle and could possibly cause harm to competitors and spectators. In light of the political instability in Russia, I have created this blog to dissect the potential terrorist activities and security of the Winter Games, and I will examine security of other international sporting events. The goal of the blog is to inform any traveler to the games of any threats to safety, and to plan a safe experience at any potential international competition. When traveling to these areas for a sporting spectacle, it is important to know the current political situation in the area to gauge how dangerous the area might be.
www.pinterest.com

the importance of sports 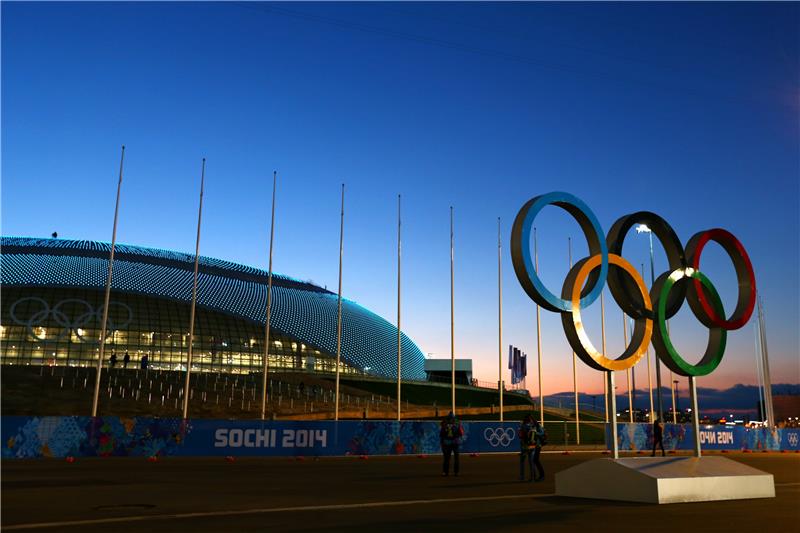 Sochi, the site for the 2014 Winter Olympics, is shrouded in controversy, corruption, and violence even before the games have started.
Sources: http://www.turningpointusa.net/winter-olympics-might-not-be-a-wonderland/
http://investigations.nbcnews.com/_news/2013/12/31/22112447-experts-fear-russia-attacks-are-terrorist-probes-ahead-of-sochi-olympics?lite

A short video showing the instability in the Caucus Region of Russia, and what it might mean for the Sochi 2014 Olympics.
Source: www.vice.com

Critics are saying the 2014 Sochi Olympics are going down in history as the worst games for its impact on the environment. In 2007, Russia promised to make the Olympic construction end up with “zero waste” , but it is controversial to how much the Olympic Construction has impacted the Local Sochi environment. The debate has been waived aside by the Russian Government as minimal , and overall construction will be "positive" for the environment, but local Sochi critics would disagree. One local, a biologist named Aleksei Yablokov, has been at the forefront of the criticisms against the Russian Government, calling the construction "barbaric". Amidst this controversy, some hotels have taken it upon themselves to make sure any travelers to Sochi are educated in the practices of eco-tourism.
One hotel group, The Carlson Rezidor Hotel Group, has been striving to make less of an impact on the environment than its competitors in the Sochi area. The hotel chain was recently awarded the Green Key eco-label for all 5 of its hotels in the Sochi area, making them the destination for . Green Key is a non-governmental, non-profit, independent program that holds hotels to certain environmental standards. It is recognized and supported by the World Tourism Organization and UNEP.  Green Key is presently the largest global eco-label for accommodation and has a national administration centre in each participating country. The Carlson Rezidor group has had to follow the Green Key criteria to be awarded the eco-label. The criteria is based on 5 main tenants:

Education of staff, clients and owners towards increased sustainable development and environmental awareness in leisure establishments;

• Strengthening of the tourism and leisure branch by taking responsibility broader than then their individual establishments.

This criteria is focused on educating the hotel operators and the tourist about environmentally sound practices for better tourism standards. Some of the requirements  include lowering the water flow of bathroom amenities, keeping control of the air conditioning and heating units, and maintaining waste products (ie. food, trash, and recyclables).  With the amount of construction that has gone into Sochi, the Carlson Residor hotel group is adhering to the Green-Key standards to try and minimize the impact they have on the local environment. Now that the Olympics are over, the responsibility Sochi has to maintain its environment will be a great challenge for the future, and the Carlson Rezidor group of hotels will help alleviate the impact these games have had.

Sochi's development in the past 7 years and the space it took up for the 2014 Winter Games
Sources and for further reading:http://www.rezidor.com/phoenix.zhtml?c=205430&p=pressArticle&ID=1896972&highlight 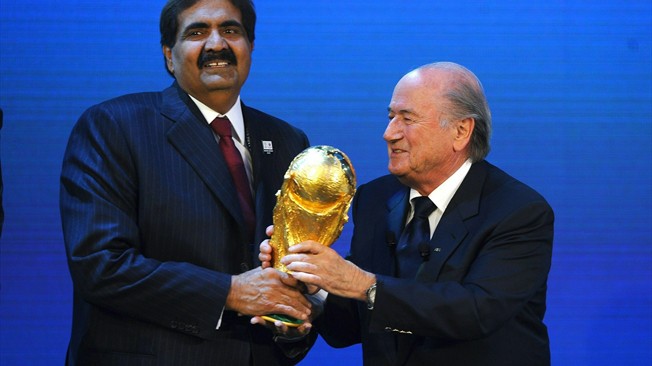 Qatar's Emir Sheikh Hamad bin Khalifa al Than accepts a replica of the World Cup to signify Qatar hosting the 2022 FIFA World Cup competition
Sports are played by opposing teams on a fair playing field, governed by fair rules that are usually determined by governmental body for the specific sport (IOC for Olympics, FIFA for soccer). This opportunity to compete fairly is why a lot of people love watching sports and competing in sport. Competing fairly in anything other than sports is rare in our world today, especially when we have exploitation problems and huge poverty gaps in many of our societies. Sport entities have taken political stances on these issues, and are fighting to ensure fair laws for people world wide.
FIFA is the governing body of international soccer play and is responsible for holding the FIFA world cup every four years, and FIFA organizes any international soccer matches between two countries. United States soccer has seen a recent rise in popularity over the years due in part to the rising popularity of international soccer matches. Soccer is the most popular sport played in the world and a lot of honor comes from all aspects of soccer. One honor in Soccer is to host the FIFA world cup, and the World Cup in 2014 will be held in Brazil. The honor of hosting the FIFA is a big deal to many countries because it brings in a lot of revenue for the host country. In 2010 South Africa (host country) saw $1 Billion from tourist the year it hosted the world cup, and also saw a 21% increase in tourism before and during the World Cup rounds.
Brazil was elected unchallenged to be the FIFA World Cup host in 2014 when FIFA declared that they were going to hold the cup in South America. For the future world cups (2018 and 2022), many countries won’t obtain the opportunity just as easily. Qatar won the bid for the 2022 FIFA World Cup but FIFA is pressing some pretty strict policies to allow a country to host the event. Qatar is a notable country that is trying to gain the privilege to host the competition. A mandate that FIFA has demanded was to install better working conditions and wages for the construction workers in Qatar. They will hold Qatar to the ILO's labor condition standards for the 1.3 million migrant workers that Qatar has employed.
FIFA has shown that it can demand human rights from struggling nations far easier than any other superpower (UN, EU) and many countries oblige to international sport governing bodies because of the money that hosting an event brings in. This can put some countries in check by using international competitions as an enforcer for fair trade arrangements within the host country.

Source: http://www.fifa.com/worldcup/qatar2022/media/newsid=2227055/
http://www.iol.co.za/news/south-africa/tourism-market-grows-after-world-cup-1.989024#.Uyzms61dWrU
Reading on how the Sochi Olympics did NOT follow Olympic standards and equality: http://www.bbc.com/sport/0/winter-olympics/26303867

Sports Riots and How to avoid them

Infographic on the common characteristics of Sport Riots and how to avoid being caught in one. Click on the image to be directed to a more interactive image, and use the links below to find out more information about past riots and how to safely avoid riot

Taking PRT 5610 showed me the impact that tourism has on certain world issues that I had previously overlooked. I never thought about how tourism can affect a local economy, and that sometimes locals will forgo human rights and eco-friendly habits to provide services to tourists. A great example in this class was sex tourism, and how it violates some workers basic human rights. Before this class I was not familiar with sex trafficking and had not thought of the impact it had in the world. Now I see the degree of impact sex tourism has on certain people, and I have a model for the consequences of tourism. I have applied this model to a variety of topics, including eco-tourism, sports, wildlife conservation, and fair trade practices. Now I see the importance of being an educated tourist, and how certain travel decisions affect the local population.
HTML Comment Box is loading comments...